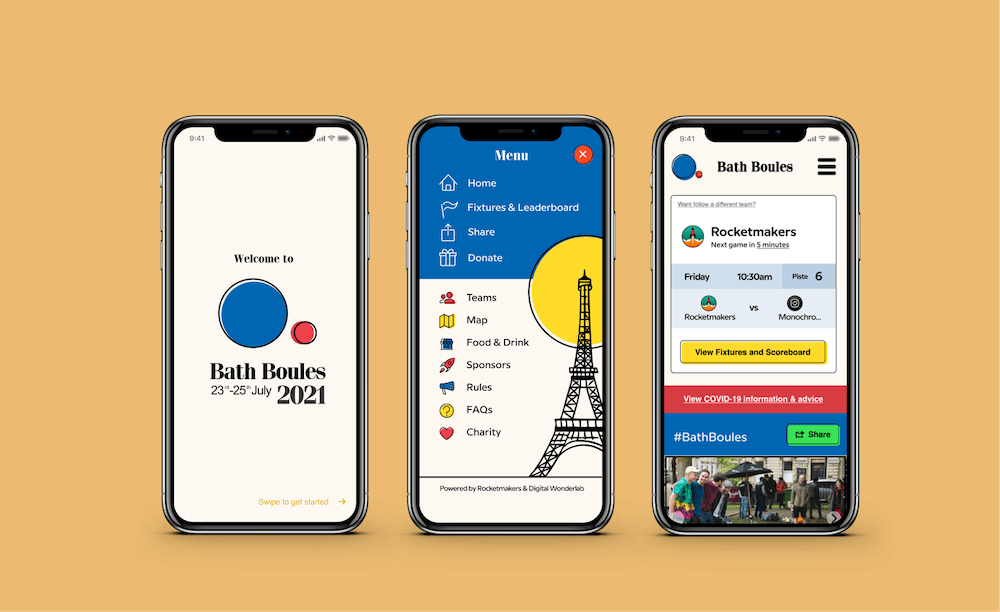 For the past 30 years, businesses across Bath have fielded teams in Bath Boules, a tournament hosted every summer in historic Queen’s Square. Organised by MediaClash, the publishers of Bath Life, Bristol Life, and Cardiff Life, the non-profit event has raised over £650,000 for charity during its long history.

As the tournament has grown in popularity year by year, its organisational needs have grown more complex. To improve the experience for everyone involved, MediaClash wanted a smartphone application for informing each Boules team who, where, and when to play each match, and for providing additional value to sponsors.

Collaborating to boost engagement and donations

The global pandemic hit not long after the project brief was agreed, but the work carried on remotely, with a goal of having an app designed, built, tested, and ready to use for the 2021 event.

MediaClash wanted an app to improve player experience, and wanted it to fit the tournament’s novelty-French theme, but had no detailed requirements. They encouraged the Rocketmakers design team to be creative.

The Rocketmakers team created several mockups with high-level overviews of the app design, to which MediaClash responded enthusiastically. 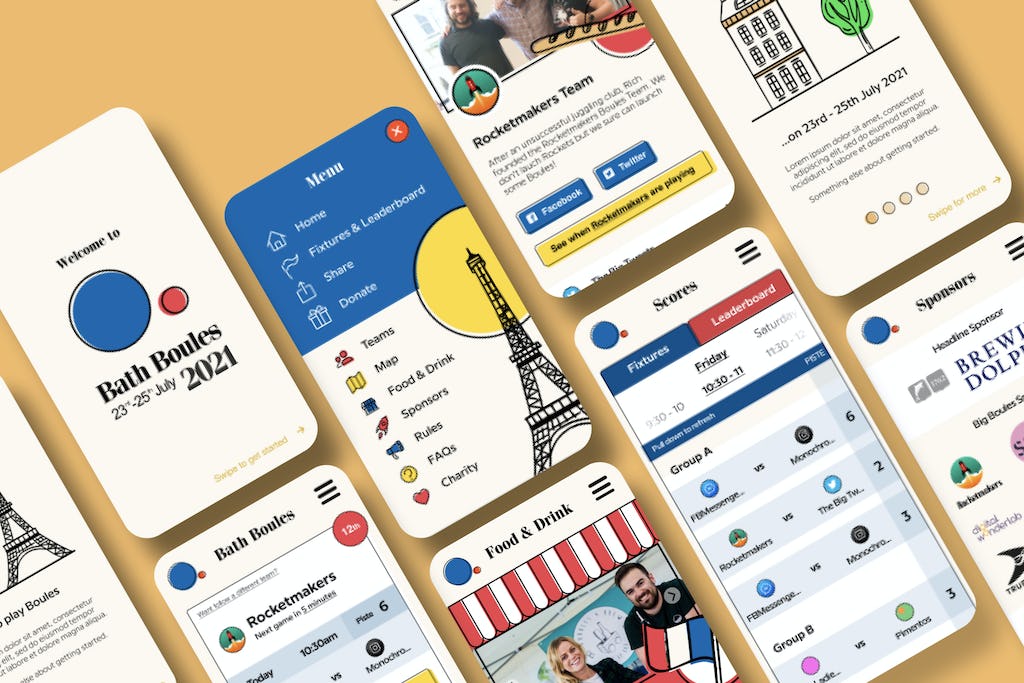 A “franglais” app with a baguette scrollbar

Rocketmakers created a French-themed design for the app which went way beyond MediaClash’s expectations. The feature which received the most positive reaction was the baguette-shaped scrollbar for reading text-heavy screens.

This feature turned out to be more prominent than originally expected, as during the design process MediaClash requested extensive COVID-related information be included in the app following an agreement with the Bath & North East Somerset council. Thanks to Rocketmakers’ agile development methodology, adjusting to the evolving demands was straightforward.

Integrating our work with the back end from DWL

Once the backend had been completed by Digital Wonderlab, the Rocketmakers team integrated it into the newly designed front end. Also integrated was a “Franglais” translation feature, which switched specific English words into commonly known French words - the app’s pièce de résistance.

Once everything was built and integrated, and tests using real data were completed, the team swung into high gear to get the app live on the Google Play store and Apple’s App Store in time for the start of Bath Boules 2021.

At Rocketmakers, we always value user feedback. At the Bath Boules 2021 event, the team got the rare chance to get that user feedback in person, while also using the app themselves as one of the boules teams in the competition.

The app worked seamlessly, updating scores and fixtures live, and helping everyone involved have a hassle-free, enjoyable time. MediaClash were so enthusiastic about the app they introduced our designers and developers to the very appreciative crowd.

We were absolutely delighted with the Bath Boules app and the collaboration, thank you so much to the Digital Wonderlab and Rocketmakers dream team! The innate UX and app knowledge shown was really impressive and both teams responded instinctively to create a brilliant in-app experience for our event attendees who enjoyed using it and were continually checking in for updates!

Are you interested in working with us to create a positive impact?