The 2020 edition of the Creative Bath Awards may have been a virtual event, but it was an especially memorable night for Rocketmakers!

Rocketmakers won the coveted Innovation award for the second time in three years. In their comments, the judges wrote, “Rocketmakers has been remarkably innovative developing creative projects such as HighCandi, Ameko and ARiVR. Forward-thinkers who often seem ahead of the curve.”

The Innovation award turned out to be only the start of a much larger haul, however.

CEO Richard Godfrey was named Inspirational Person of the Year, and junior developer Alice McNeil was named Young Creative of the Year.

Rocketmakers social media star intern Izzie Hensby won the Creative Student category! Izzie won the award on the strength of her Wizzie Social social media service which was one reason why she was the best possible applicant for our Summer marketing internship.

Add it all together and Rocketmakers won a whopping four out of the twenty-one categories on the night!

CEO Richard Godfrey was particularly chuffed with the results.

We have always been firm supporters of the Creative Bath Awards since they began, so it was great to have that level of recognition from the other members of the community who take part.

Most years the Creative Bath Awards ceremony is held in a large tent on Queen’s Square in central Bath. With music, street food, and a very relaxed dress code, it is normally one of the top social events for the City’s creative sector every year.

Recreating the same atmosphere in virtual form was a tall order, but the organisers nevertheless put on a well-organised, highly entertaining show. Hosted by Creative Bath founder Greg Ingham and BBC Bristol’s Laura Rawlings, the event somehow managed to capture much of the fun of a more normal year.

It was especially encouraging for two of the younger members of the Rocketmakers team to be recognized for their work. Speaking of Alice McNeil, winner of the Young Creative Award, the judges wrote, “Alice is highly praised at Rocketmakers beginning as its first apprentice developer and becoming a leading presence in recent app projects. A great prospect with an already promising track record.”

Izzie’s talents were also lauded by the judges, who described her as “a smart creative enterprise generating decent revenue through her applied creativity,” and “one to watch for the future.”

Topping the 2020 results at the 2021 Creative Bath Awards will be a tough challenge for the Rocketmakers team. But even more exciting, and more worthy of celebration, would be the 2021 edition returning to its tent on Queen’s Square - that will indeed be a great moment! 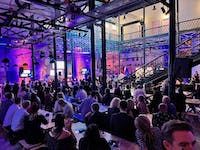