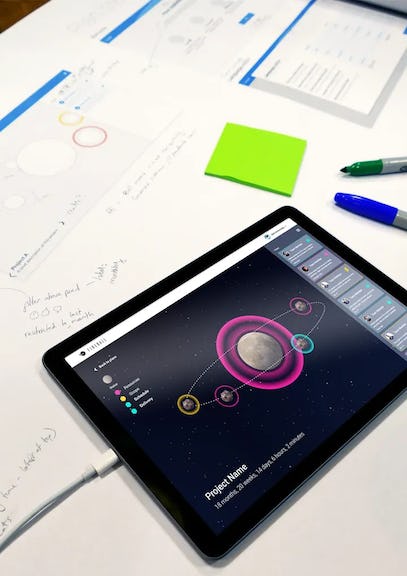 Rocketmakers launched its most recent elite sports software last week with the release of the new Fireball system.

Commissioned by UK Sport, the new software is a powerful project management tool customised for the needs of elite sporting bodies.

The idea for Fireball came from Matt Parker, who was Head of Marginal Games for the Team GB cycling team at the 2012 games. Matt wanted a new and better system for setting goals, monitoring activity, and measuring progress. The result, Fireball, has now been adopted by several sports national governing bodies for initial testing and feedback.

The brief for Fireball contained one element the Rocketmakers team had not been expecting: an emphasis on the system’s visual design. Matt believed that if Fireball was exciting to use, users would engage with it more regularly. A space theme was suggested, and Rocketmakers devised a structure with planets representing goals and moons representing projects that contribute to the goal.

“We were not expecting to be asked to produce a space-themed user interface, especially for a project for Sport UK,” explained Rocketmakers CEO Richard Godfrey, “ but Matt’s vision made total sense when he explained it. The project’s value depends on stakeholders entering data frequently and regularly. The more visually attractive the system the more likely people will use it.

“Our lead designer, John Grigg, has come up with one of his best designs yet. It’s very different from the more playful space theme used for Rocketmakers’ corporate branding. Users have the perspective of someone driving a spacecraft, with a view of a planet with revolving moons ahead of them. The images have a very realistic feel - they look like real planets.”

Fireball is accessible using any web browser, however only the homepage is visible to the public without a user login.

This is the second software system built by Rocketmakers for use by elite British Athletes. PDMS, which helps athletes, coaches, and medical staff monitor performance and manage injury recoveries, was launched in 2014.