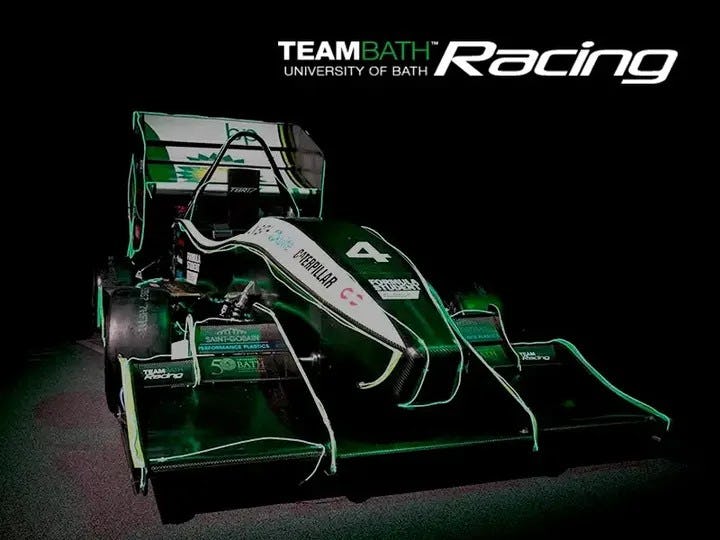 In May 2019, Rocketmakers and Team Bath Racing hit the headlines: for the first time in history a competitive racing car was built using Augmented Reality (AR) technology. The news made headlines across the UK, in everything from RaceTech magazine to ITV News.

But this was not the first time Rocketmakers had cooperated with the engineering students at the University of Bath, who compete in the Formula Student auto racing competition every year. The competition challenges student engineers to design, build and race a single-seat car in one year. Known as Team Bath Racing, the students are the most decorated British team in the entire competition.

Rocketmakers had designed an AR model of the Team Bath Racing 2017 car. The model was displayed on the Microsoft Hololens headset, and used as part of the students’ presentation to judges. This was an important part of the competition, but not nearly as exciting as the time trials at Silverstone.

In the Autumn of 2018, Rocketmakers and Team Bath Racing decided to collaborate again, but to raise the stakes. The goal would be to create an AR-powered tool which could help in the construction of the 2019-model car.

Both groups wanted to create and test a tool which was genuinely useful, could operate easily within the constraints of current AR headset technology, and required minimal advance work by the students. Various ideas for how to deploy AR technology were considered, including an option which would allow the students to plan the placement of the engine, brakes, and drive train in 3D.

Eventually a tool for applying carbon fibre laminates to the car’s monocoque was chosen. While carbon fibre laminates are typically applied by robots in production vehicles, their application in small-scale production is generally one of the more physically and mentally demanding parts of building bespoke vehicles. Current state-of-the-art, even for Formula 1 car construction, consists of placing a computer screen nearby and “eyeballing it.” One misplaced carbon fibre segment can have large negative consequences for the integrity of the final result. 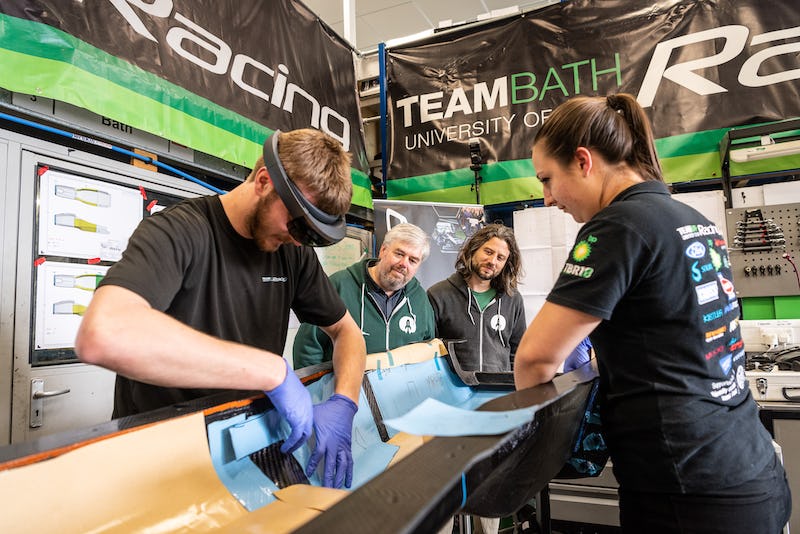 Jack Harris, a student of mechanical with automotive engineering at the University of Bath, said: “After you’ve spent most of a year designing a car, the week-long process of carbon fibre layup is really nerve-racking.

“We’ve been talking to Rocketmakers for months to determine where the best use of AR technology would be for assisting car construction.

“Carbon fibre layup is definitely one of those jobs that despite the high tech equipment we use for our design and testing, it still relies mostly on hand-eye coordination.

“Having a tool to assist with the stressful, backbreaking process is really exciting.”

Once conceived, the idea for the new tool required a lot of work to implement. The carbon fibre application was assisted using two Microsoft Hololens headsets. Although these are currently the most powerful headsets available commercially, the complexity of virtual images the Hololens can project is still limited. Carbon fibre layup is ideal because it concentrates on a single car body part at a time. 3D CAD files of the new car were created by the students as part of the design process, but they were too large to fit into the Microsoft Hololens processor. After designing a conversion process, and a fair amount of experimenting, the AR tool was ready for testing and use.

The final result created an augmented reality version of the car monocoque which was “placed” on top of the real monocoque. The correct shape, location, and orientation for each carbon fibre segment was then displayed to the wearer, guiding the application process.

Microsoft Hololens in hand, the Rocketmakers team travelled to the Team Bath Racing workshop on the University of Bath campus. After some initial testing, the new tool was used to lay the first carbon fibre laminate panel, and history was made!

Richard Godfrey, chief executive of Rocketmakers, said: “At Rocketmakers we love creating new innovations with the latest technology, and this is a great example. It will be great knowing when we see the Team Bath Racing car zip around the track that our designers had a hand in making it one of the world’s first AR-assisted cars.”

News of the world first appeared everywhere from racing industry publications, to academic engineering websites, to newspapers across the UK.

Later that year, the Rocketmakers-designed AR tool was recognised with the Most Innovative Use of VR/AR Award at the Sparkies, the annual awards for excellence in tech in the South West organised by TechSPARK.