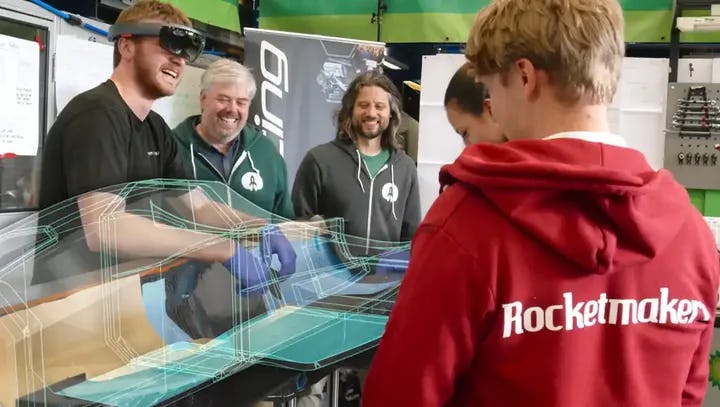 Students from the University of Bath have used a new augmented reality tool developed by Rocketmakers to assist production of their 2019 Formula Student competition entry.

This is believed to be the first time the technology has been used to build a competitive race car.

News of the world-first has been reported worldwide, including Yahoo News, ITV, BT.com, and The Engineer.

The car will be entered into Formula Student, a worldwide design and business competition with over 600 competing teams. Each team must design, build, test, and race a new, small-scale formula style car using knowledge gained over the course of their degree.

Team Bath Racing is the UK’s most decorated Formula Student team and in past competitions has held a top 10 world ranking.

The AR tool designed by Rocketmakers was used for the construction of the car’s monocoque, specifically to assist with the application of carbon fibre laminates.

The Rocketmakers designed tool creates an augmented reality version of the car monocoque, with the correct shape, location, and orientation of each segment visible to the wearer one at a time. Although the carbon fibre segments are ordered precisely in advance, the tool allows the students to skip from segment to segment as needed.

The new tool is expected to provide the users with a much improved work experience and accuracy rate than current methods. While carbon fibre laminates are typically applied by robots in production vehicles, their use in small-scale production is generally one of the more physically and mentally demanding parts of building bespoke vehicles. Current state-of-the-art, even for Formula 1 car construction, consists of placing a computer screen nearby and “eyeballing it.”

As one misplaced carbon fibre segment can have enormous negative consequences for the integrity of a car part, the Team Bath Racing team are delighted to be the first to try out the new Rocketmakers tool.

“We’ve been talking to Rocketmakers for months to determine where the best use of AR technology would be for assisting car construction. Carbon fibre layup is definitely one of those jobs that, despite the high tech equipment we use for our design and testing, still requires mostly hand-eye coordination. Having a tool to assist with the stressful, backbreaking process is really exciting.”

The decision to use AR to create a tool for assisting carbon fibre layup was made after many months of discussion between Rocketmakers and Team Bath Racing. Both groups wanted to create and test a tool which was genuinely useful, could operate easily within the constraints of current AR headset technology, and required minimal advance work by the students.

The carbon fibre application will be assisted using two Microsoft Hololens headsets. Although the most powerful headsets commercially available, the complexity of virtual images the Hololens can project is still limited. Carbon fibre layup is ideal because it concentrates on a single car body part at a time. Even so, to work with the Hololens the resolution of the computer assisted design (CAD) files the students use for most work had to be reduced to be compatible with the Hololens processors.

Rocketmakers provided its expertise in AR free of charge to Team Bath Racing as part of the company’s ongoing commitment to developing technology talent in Bath and the southwest of England.

“At Rocketmakers we love creating new innovations with the latest technology, and this is a great example,” Rocketmakers CEO Richard Godfrey said. “It will be great knowing when we see the Team Bath Racing car zip around the track that our designers had a hand in making it one of the world’s first AR-assisted cars.” 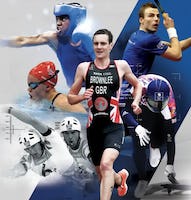